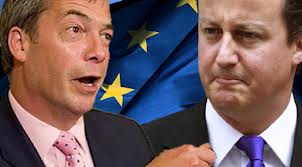 There is a dramatic realignment of English politics going on just now and the outcome will be crucial to the next UK Government should Scotland opt to remain governed by Westminster. The current UK coalition is already three parties. There are the David Cameron loyalists (who are now in the minority), there are the already doomed Liberals and then there is the ‘continuity’ Conservative/UKIP faction. Only one of these three parties is on the ascendency.

In preparation for the next election, agendas are being shaped and possible alliances are being forged. Nadine Dorries is the first Conservative MP to say that she would stand on a joint Conservative/UKIP ticket and influential backbenchers like Peter Bone and Jacob Rees Mogg actively talk of alliances with UKIP. Expect these discussions to intensify as sitting Tory MPs calculate the damage to their futures if they contest UKIP candidates in their own marginal constituencies.

Already, ‘continuity’ Conservative/UKIP dominates the political debate in the House of Commons. Their agenda is now Westminster’s. Cameron loyalists, transfixed and powerless, have adopted a disastrous strategy of simultaneously calling them names and pandering to their insatiable appetite. Labour; stuck on about 35% in the UK polls, looks on helplessly, aware that they have to win seats in the shires to be the next Government, exactly where UKIP are hoovering up the votes.

Meanwhile, in Scotland, Nigel Farage comes to Edinburgh to almost personally demonstrate that we’re two very different countries. Scotland will never vote UKIP because our values and political culture is so very different from what they propose and are essentially all about. Less than 1% voted for UKIP at the last test of national opinion in Scotland. They are a political irrelevance in Scotland but a major, powerful, influential force in England and UK politics and that is what matters in the Government we’re likely to get.

Since the Scottish Parliament, Scotland and the rest of the UK have become two very different political cultures, yet we could be governed by a Government that is increasingly alien to us. I hope England does not go down the road of an increasingly insular and right wing agenda, but if that is what they want that is what they should have. We, meantime, deserve the Government we vote for.

It is the very least that any self respecting nation should expect.

4 thoughts on “THE NEXT GOVERNMENT YOU DIDN’T VOTE FOR?”