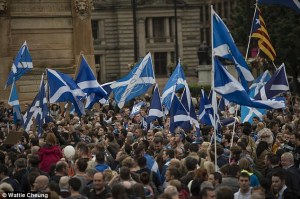 The last few days have been just about the most traumatic, exhilarating and emotionally draining I have ever known in my political life. Yet, I still feel invigorated, hopeful and optimistic about the future of my country. I’ve seen my nation accept the verdict of the Scottish people with good grace and without any hint of the rancour predicted by those who don’t really understand the resilience of this wonderful country. I have seen the incredible spirit of those who have campaigned selflessly to the point of exhaustion in this referendum and who have vowed to continue so that the energy and engagement created by the independence referendum continues to have a voice. Many thousands have joined the SNP and other political parties in the last few days; determined to stay in the debate about our future. Many more have vowed to continue to campaign in their own way and have their voice heard. Some, uncertain how to express their views, have just left contributions to be distributed at foodbanks. This is why our country is a most remarkable place and why we will endure, regroup and progress.

I am still unclear on how all of this will now work out. Scotland has spoken and rejected independence by a clear majority, but yet we don’t feel defeated or diminished. What we must, therefore, do is to focus on what we can achieve while we’re all still in this particular place and while we’re all still focussed on national self improvement. I will work with anyone who wants to make my country a better place and that includes all of those in the No campaign who are serious about taking our nation forward. Nothing will disabuse me from the belief that the people who live and work in Scotland are those best placed to make the decisions about Scotland’s future. Scotland rejected independence, but we must ensure that we continue to take our country forward with the fullest range of powers available to the Scottish people.

I am also still uncertain about what is on offer from the UK parties. Their offers seem to range from the most limited tinkering of tax powers to talk of full ‘devo max’. Created in a panic, they are now falling out with each other about how to proceed. The Tory Government is now determined to include issues to do with powers for England and the voting rights of Scottish MPs. Cameron introduced these English proposals immediately after the referendum was concluded to placate his own MPs and get any ‘more powers’ settlement through a hostile House of Commons that has just about had enough of Scottish constitutional debate. Labour, sensitive to their own self preservation issues, have rejected this inclusion- leaving the two main UK protagonists in something approaching a deadlock.

That is why it now up to us to take the lead and define what is required to take Scotland forward. Whilst we should continue to press the UK parties to honour the commitments made for Scotland, we should also start to define what Scotland actually needs to make a difference. Let’s start with the definition of devo max. ’Devo max’ is maximum devolution and it is everything devolved other than defence and foreign affairs. We should now be shaping up as to how this can be delivered and start to advocate for this quickly according to the timetable set down by the No parties. We can do this under a full ‘Home Rule for Scotland’ banner and unite all the Yes groups and those who voted No seeking the fullest range of more powers for Scotland.

We are ready for this new leadership role and with tens of thousands of new recruits, we have the energy and the will to continue to shape our country. If Westminster fails to respond we must have the right to review our status within the UK again. Meanwhile, let’s prepare for the General Election in eight short months time. This is where this new movement can start to flex its muscles and return a large group of Home Rule Devo Maxers. This isn’t finished yet and we still have a pivotal role to make our country a better place, and ensure it can be all it can be.

7 thoughts on “MOVING ON”