Those of us of a nationalist persuasion have been enjoying immensely Scottish Labour’s excruciating policy contortions as they desperately try and get a bit of traction into their moribund election campaign. There is absolutely no doubt that there is a new frenetic energy in Scottish Labour and there seems to be no limits to the almost daily policy ‘adaptions’. From picking a fight with London, to re-introducing booze at the fitba’, Labour are currently like a hyperactive duracell bunny on stimulants. 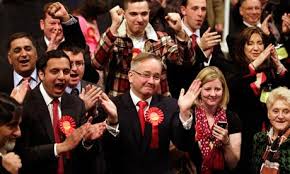 Whilst all of this is incredibly good fun to observe, we have to ask if any of it might actually be working? Labour has famously targeted Glasgow ‘man’. This is the former Labour voter in West Central Scotland who voted Yes and who probably also voted SNP in Scottish Parliament elections. Labour have identified 190 000 or so of these voters who now have to be lured back if Labour is to hold on to their seats in the General Election. The problem for Labour is that Glasgow ‘man’ remains singularly unimpressed with what he observes and has several unresolved issues with the ‘man’ from Scottish Labour.

Chief amongst them is the company that Labour has been keeping. The two year association with the Tories is not so easily dismissed by the waving of a flag and the unimpressive declaration of patriotism. Glasgow ‘man’ heard the ‘man’ from Labour describing his political ambitions as a ‘curse’, or a ‘virus’. He was also labelled a ‘separatist’ (and worse) from those who now seek to enlist his support to save their careers. If Glasgow ‘man’ was of a mind to perhaps forgive Scottish Labour for this as a referendum ‘thing’, he would quickly be disabused of the notion by witnessing the ‘men’ and the ‘lassies’ from Labour voting with those self-same Tories on further austerity, a welfare cap and £100 billion of Trident renewal. Glasgow ‘man’ might just be thinking that the ‘man’ from Scottish Labour increasingly bears little difference to their former colleagues – the ‘gentlemen’ from the Tories.

Labour’s problem isn’t going to be addressed by the almost nonsensical policy stunts. It is only going to be addressed with a fundamental look at the space it currently occupies. A new political era is emerging and there is a real sense that the Labour/Tory neo-liberalism that has characterised our politics for the past decades is coming to an end. Scottish Labour, like its UK head office, still seems to be very much attached to the old orthodoxies and the maintenance of a ‘more of the same’ Westminster establishment austerity hegemony. Where Scottish Labour tries to breathe life into a politics on its death bed, Glasgow ‘man’ has already moved on.

I don’t know if Labour will find the message to lure Glasgow ‘man’ back to its paternalistic bosom, but we must continue to provide him and the rest of our fellow Scots with hope and a new challenge to old ways of doing things. Labour, as ever, still seems to be picking the wrong fight with the wrong range of armoury and will probably only end up shooting themselves in the foot once again. Meanwhile Glasgow ‘man’ seems to be perfectly happy with his new home and we should give him everything he needs to sustain himself.