Brexit hasn’t properly started yet but just the sheer fact of it being decided has profoundly psychologically impacted on how we feel about ourselves and how we interact with the world. Everything feels different. There’s a feeling of being more constrained, smaller, of being culturally alone and communally detached. Being on holiday in Europe there was a real sense that all these other nationalities are part of a club that I’m now excluded from and they are planning all sorts of new co-operative shared initiatives that I can now only observe. 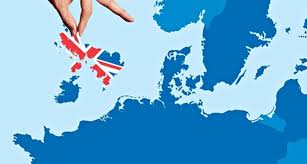 Marooned on this small island, governed by the most right wing ideologues in this section of the planet, doesn’t help this sense of being adrift in an interconnected world. The rest of Europe will be getting on with building shared institutions whilst isolated Tory UK will be getting down to the business of scrapping the Human Rights Act. The loss of access to the free movement of peoples across our continent is probably the most self damaging decision we have made in our island history. The access that my generation had to mix, work, learn and build relationships with our European friends will be lost to the next generation as Europe reciprocates in kind by closing down the continent to Brits. This decision has denied our young people all those opportunities and experiences that we simply took for granted. This generation of young people have every right to feel angered and aggrieved at the isolated, inward looking United Kingdom they will now be bequeathed.

And then there are the reasons that underpin why we’re doing all of this. A massive distrust, even contempt, of others who want to come and live and work amongst us. An agenda based on suspicion, insecurity and most of all fear. What a cultural basis to start this singular, self dependent journey into splendid isolation. Departing the European Union as a project is the culmination of decades of work by UKIP and right wing Conservatives. It is their agenda that has prevailed and will influence our journey into solitude.

Then there was how this was won. The biggest pack of lies ever presented to this nation. £350 million per week would to be returned to our NHS just being the most obvious example of the rubbish claimed by people no longer a feature of our national politics, and rightly returned to the obscurity where they belong. Then there is what has happened since. The sense of trauma, a feeling of ‘good god what have we done!’, a rise in racist attacks and intimidation of immigrant communities, a ‘philosophical’ approach to declining currency values, downgrading of credit ratings, stock market crashes and deep, deep uncertainty and insecurity. There is still a feeling of disbelief about all of this and the looking for someone to pick up all these shattered pieces.

I’m now told that I should look for the positives in this appalling decision. We’re back ‘in control’, our borders will ‘be secure’, powers will be ‘returned’ and we are free from ‘unelected bureaucrats’. They can frankly shove all that nonsense where the European summer sun don’t shine. There is absolutely nothing positive to be taken from this vote and it still feels like something to be mourned.

But Brexit means Brexit, we are blithely reassured, as if making it alright. What Brexit actually means is unfettered Tory rule unconstrained by the positive influence of partners. It means isolation and deep introspection. It means insecurity, uncertainty and absolutely no plan on how we deal with it. It means closing down the continent to our young people and denying tariff free trade to our businesses.

I still hope that my nation, a nation that voted for continuing partnership and inclusion, can still escape the ramifications of this vote. Scotland wanted none of this and Scotland’s view should be respected. I think you can tell I’m still struggling to be reconciled to this awful decision. Scotland should also continue to be angered and unreconciled about it too.

Like most politicians in Scotland I have a ‘complicated’ relationship with my press colleagues. I’m always grateful for the coverage I receive but remain anxious about the power they have to make my life an absolute misery. I remember being splashed across the front page of the Sun with the headline ‘What a Twit’ for one of my latest indiscretions on social media and the way the Daily Mail particularly likes to give ‘airtime’ to my particular views is always a ‘delight’. Like nearly every other politician of a nationalist persuasion I have been variously ‘hypocritical’, ‘a barefaced liar’, ‘accused’, ‘shamed’ and other adjectives too numerous to mention. The joys…..

Like most of the media elsewhere the Scottish media is in decline. Sales are precariously down, historic titles teeter on the edge of survival and the media’s influence diminished to a shadow of its almost omnipotent former self. Struggling to find a meaningful place on the new digital platforms Scottish titles wrestle with the new digital place they now find themselves in.

Add to that 24 hours broadcast news outlets means that ‘news’ is so often ‘olds’ for a press that has to be printed for the declining number of the next morning’s customers. In trying to find a space online ‘the press’ encounters stiff competition from the broadcasters, particularly the BBC, who simply crowd them out with their own extensive online presence. Only the biggest newspaper titles with the deepest pockets seem to have carved a meaningful place in the new online news terrain and very few of those are Scottish titles.

The Scottish press therefore has to rely on even more insider ‘exclusives’, creative headlines and ‘scoops’ for its news profile and increasingly comment is king. This then comes up against the ‘democratisation’ of comment with the proliferation of social media. No longer is there the passive consumer, everyone now has access to comment and the opportunity to express an opinion and challenge comment they disagree with.

Traditional journalists working in this diminished environment try their hardest to promote a meaningful role for themselves. They come to the party, though, with a historic and cultural baggage that finds the new ‘engagement’ difficult and problematic. Unused to having their views challenged many traditional journalists retreat into a self affirming huddle hitting out dismissively at a more demanding and critical readership. Increasingly our press colleagues feel that they should not be challenged at all if we happen to disagree with their particular and loaded perspective.

But here in Scotland we have practically recreated a new environment for news and things have almost been revolutionised here. The referendum changed things dramatically and Scotland is possibly several steps ahead and further evolved than most other nations in embracing new media. Identifying that almost none of the traditional press supported Scottish independence the Yes campaign simply created its own. This was done organically, and importantly online, and the sheer range of these new sites became one of the most interesting features of the referendum campaign. Those sites satisfied an increased desire for a different type of news and they offered a perspective simply unavailable in the traditional press, overwhelmingly hostile to the independence cause. It could be said that the traditional press gave birth to this new on line engagement by denying a large swathe of public opinion an editorial place in its structures.

What we therefore have is an evolving, exciting, almost anarchic space for comment with more people actively engaging in political debate than ever before. The traditional press now lives cheek by jowl with new media in full view of a online public with an almost insatiable appetite to be informed and engaged.

But a ‘press’ remains an absolute essential and I would go to the ditch to protect the right of a free press to print whatever it wants. The idea of a free press is the very cornerstone of democracy but it is also right that the press is challenged. Most of the traditional press is owned by powerful individuals or institutions with a particular world view which they believe is in need of promoting. Journalists and broadcasters are also increasingly ‘commentators’ actively involved in our political debate promoting their own particular strong personal views that just cry out to be examined. They can not expect to be exempt from challenge when they have such a privileged position in the debate about our nation.

The traditional press in Scotland will continue to decline unless it can face up to the new realities of the place it finds itself in. It can wish things were the way they used to be, it can even wish the Scottish consumer was a bit more grateful and satisfied with what it has to offer. But we will not be going back to the old days and the Scottish press has to get used to that fact.