Rarely has a policy on a major issue of the day been as shambolic and vacuous as Labour’s policy on Brexit. Intellectually incoherent, contradictory and politically inept it is quickly becoming the defining feature of Jeremy Corbyn’s leadership of the Labour Party. It is a policy that has singularly failed to unite the Labour Party and it is a policy that Labour seem so uncertain about that they barely make any attempt to promote at all.

Labour’s policy (as far as I understand it) is to leave the single market and customs union to ensure that ‘the referendum result is respected’. Their biggest single issue and concern is with freedom of movement which they believe has to be ended to halt what they describe as an ‘erosion of workers pay and conditions’. But it is an ever changing Brexit position because the definitive Labour Brexit policy depends on which part of the Corbyn leadership has the misfortune to answer questions on it on any particular day of the week. Some days it is a definitive ‘I think we’re leaving the single market’ other days it’s a bit more confused than that. What we do know about the Labour leadership position is in how they have voted in Parliament. There, they voted for the triggering of Article 50 and opposed a motion, brought by some of their own backbenchers, opposing a Tory hard Brexit sacking any MP who dared to vote against Corbyn.

Corbyn’s position seems to be a throw back to the historic antipathy to the EU that has defined so much of the Labour left since the 1970s. The Bennite left forged this anti European line in face of what they saw as some sort of anti workers cartel in the then Single Market. Since the days of Benn and Wilson Europe has totally transformed almost unnoticed within the Corbyn left. There has been the introduction of the social chapter, championed by social democratic/Liberal Governments in the face of opposition from conservatives, usually from the UK. Directive after directive gives more protection to workers across the continent and let’s not forget the critical work done on protecting the environment. The ‘anti-workers’ Europe lampooned by some of the Corbynistas rushing to defend their man bares little relation to the EU of 2017. Try as I might, I also can find no compelling evidence that freedom of movement somehow conspires to drive down the wages and condition of working people. With unemployment at an almost historic low ending freedom of movement can only in fact damage the economy impacting on all of us.

And Labour’s Brexit position is so politically inept. Currently in the ascendancy the Corbynistas hope to bring down this Government as quickly as possible and get their man into number 10. Now, it might be possible to achieve this by beating them on the Driverless Cars Bill or the bill to regulate the provision of travel insurance but it is highly unlikely. This is a Government that has produced a legislative programme as opaque as possible determined to ensure that there is nothing of substance that can be defeated in parliament. Sure, Labour have non binding opposition days and can call votes on meaningless amendments to these meaningless bills, but these don’t bring down Governments. The only meaningful votes we will have in parliament will be on Brexit and here Labour agree with the Tories on practically all of the main themes in leaving the European Union. The Repeal Bill may offer opportunities but again I struggle to see where Labour diverge from the Tory Government on what they hope to achieve. Legislatively, Labour have almost given the Tories a free pass in this parliament and will have few opportunities to test the Tories minority position when they agree with them on the big issues of the day. 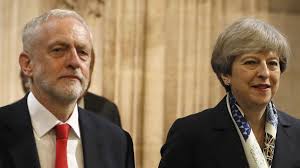 But it is the impact of their Brexit policy on his newly created constituency that will probably finish him off. Young people flocked to Corbyn in huge numbers but I’m pretty sure none of the banners proclaimed ‘end freedom of movement’. The rights enjoyed by Jeremy and I to live, work and love freely in Europe without borders will be denied to our children as the Corbynistas work with the Tories and the UK right to stop people coming here. Jeremy’s young supporters will face the inevitable reciprocal restrictions on their freedom of movement as European Governments respond in kind to the UK’s Faragist approach. It’s also hard to see how the Labour voting international city of London is going to readily go along with leaving the single market and ending freedom of movement.

As the reality of a hard Brexit sinks in more and more people will be paying attention to Labour’s Brexit approach and they will not like what they see. To be virtually undistinguishable from the Tories on something that is so immensely damaging to the UK will eventually take its toll on Jeremy’s support. Corbyn supporters did not buy into a Tory hard Brexit but it is that which is increasingly defining their man.

On a programme with so many commendable features that has inspired a new generation into politics wouldn’t it be ironic if Corbyn fails because he has thrown his lot in with a failed Tory Government pursing a failed Brexit policy.