I admit it (sad as it may seem) I’m a keen student of the Scottish Conservatives. Having had them as my main and only credible opponent in Perthshire I find them a fascinating, eccentric and curiously dishevelling political organisation. I observe them scrupulously and am always keen to understand what they are up to and where they are at. After all these years I think I can confidently say that I have got to know them reasonably well. For example, at the last General Election I was able to tell that I was more or less safe when I saw that they were re-running the same campaign as 2017. I think I can say (with all due modesty dispensed with) that I knew well before they did that they had no chance. In the end I increased my majority from 21 to 7,550 and secured 51% of the vote.

They now have a new leader and they are quite rightly excited about their prospects at the next Scottish election. They certainly don’t lack ambition. They have said that they intend to become the next Scottish Government after May next year. And to be fair, for them, they have had a few successful years. They have overtaken Labour and have become the main opposition in Scotland. Two years ago they secured 13 MPs and for a while it seemed that their upward trajectory had real momentum. They were dynamically led and managed to almost distance themselves from the traditional Conservative image with all the negative connotations associated with what had became something close to a toxic brand in Scotland.

Unfortunately, a couple of minor things came along which brought this progress to a shuddering halt. One, was the election of a deeply unpopular (in Scotland anyway) Conservative Prime Minister in the shape of Boris Johnson. Secondly (as a consequence) the departure of the Scottish leader who had presided over this modest success. The first electoral test they faced under these new circumstances was calamitous. They lost more than half of their Westminster representation and saw their national vote share plummet. 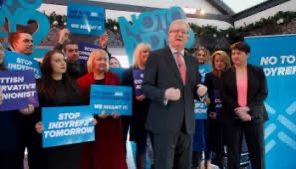 So what now for their chances as they go forward?

I think that it would be uncontroversial to suggest that their new leader is not exactly imbued with the charisma of his predecessor. Jackson may be many things but a font of charm, he most definitely is not…

The one policy that has come to define the Scottish Conservatives in the past few years has been their absolute and determined opposition to a further referendum on independence. They have pretty much made this their exclusive domain and are more or less defined by stopping Scotland deciding again. I collect all their literature (again, sad, I know) and every single leaflet I have had since 2015 is at least 2/3rds devoted to this ‘no to’ message.

So what is the first thing they do under their new regime? Well, almost incredulously, it is to dispense with the one thing that has underpinned any modest electoral success that they have had in the past few years. The Scottish Conservatives have ‘ruled out’ an independence referendum so will now no longer be able to campaign against it.  No more field posters asking us to ‘say no to indyref 2’ no more ‘vote for us to stop another referendum’. Campaigning against something they have ruled out would render them ridiculous and more critically would have them concede that a referendum is still a possibility.

Losing this means they will have to do something different and that looks like a hysterical and sustained assault on the SNP’s record. Attacks on education, the health service, policing will now descend into the apocalyptic. They rightly calculate that the media will pick up on this supersonic ‘SNPbad’ armageddon with them telling us that only by voting Scottish Conservative will this be put right.

Only, there’s maybe a couple of obvious flaws in this plan. The first is that the Conservatives are actually in power in the UK and everyone can see what they are like in Government. All the Scottish people need to do is observe what’s happening in England and compare and contrast that with Scotland and come to their own conclusion about who is performing better. If they want, they can even have a cursory glance at their disastrous ‘Council of Chaos’ in Perthshire to see how Tory stewardship works in Scotland.

The other problem is probably more of an issue for the Tories. People actually use public services in Scotland. For any criticism to work it has to chime with the day to day experience of our fellow Scots, most of whom are relatively satisfied with our health service, our schools and the fact that Scotland is now a safe place to live in. Yes, the Scottish people want better public services but they also get it that it’s the Tories who have introduced austerity and devastating cuts to the Scottish budget. The Scottish public know that the SNP Government are trying their best under difficult circumstances and the 45% who voted SNP just a couple of months ago suggests that they trust the SNP to deliver. Screaming at the Scottish public that they should be appalled at our hospitals, schools and police service will just alienate the Tories even further from the Scottish pulbic.

The Tories, being Tories, will also have their own ideological agenda to pursue and that is likely to involve cutting tax and eroding the very public services that they are so unhappy with. With no ‘no to indyref2’ to campaign on they will have to have real policies which will be forensically scrutinised. Then there is the little matter of Boris Johnson, the real boss, who will continue to do things in which Scotland is unlikely to approve of.

Without their ‘no to an indyref’ message this could be a long, hard election for the Scottish Tories, particularly in a Scotland where the constitution will define our politics like never before. Losing your only horse in the race before the starting shot is not a good start.

It looks like their ‘mini revival’ may be well and truly over. And, ironically, they will only have themselves to blame for that.

1 thought on “WITHOUT THEIR ‘NO TO INDYREF2’ IT COULD BE A LONG, HARD ELECTION FOR THE TORIES”