On Friday night, just for a moment, we got a rare glimpse into some of the thinking that must be going on in the higher echelons of the Scottish Labour Party. Just as we were trying to make sense of it, understand it, respond to it, it was simultaneously being clarified, redefined, debunked then apparently junked. It does, however, remain profoundly significant.

Saying it is ‘not inconceivable’ that a Scottish Labour leader would support independence perhaps marks the start of a necessary journey that could just about save Scottish Labour from itself and ensure that our nation secures the progress it requires. Regardless of how hard SLab might try to avert our gaze from this exotic and exciting new dish it sits squarely there on the table demanding our attention and response. 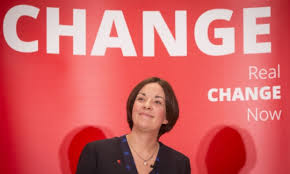 I don’t believe for a moment that when all those strategists and thinkers get round the Scottish Labour top table there isn’t a real and meaningful debate concerning the reasons why SLab are currently in their precarious and almost catastrophic situation. It would be inconceivable if someone didn’t raise an arm and say loudly and clearly ‘we have to review our approach to independence because being a unionist party is killing us’. They will have all the evidence at their disposal to at least accept that this is a legitimate assessment. They will have seen the charts that show that the Westminster constituencies with the largest Yes votes saw the largest swings away from Labour. They will have commissioned those focus groups which will report back to them telling them that the reason that they are so singularly unpopular is because of their unionism and because they stood shoulder to shoulder with the Tories in the referendum.They will have heard the response on the doorsteps for themselves from all those former voters who will tell them in no uncertain terms that they’ll never vote Labour again as long as Labour stand in the way of their constitutional ambitions for Scotland.

There will be those at the SLab top table who will totally get it. Who are ambitious for their party, who know what has to be done. I can almost imagine the conversation round that top table when the reassurances that ‘eventually’ former Labour voters will move on from their constitutional concerns being challenged by the ‘reformers’ that the Tories are actually still in decline after being wiped out 20 years ago! All of this must be going on in Scottish Labour and securing that fleeting glimpse of a potential for indy support reveals that this must be some sort of live discussion.

And the reformers have their chance. The old unionist generation have all been wiped out and have more or less disappeared from the political scene. The old generation of paternalistic Scottish Labour MPs brought up and weaned on the Westminster gravy train are no longer a feature of Scottish politics and their unconditional unionism has gone with them. Kezia, in that interview, revealingly informed us that she doesn’t refer to those Westminster dinosaurs anymore, and she shouldn’t. Their agenda was an agenda of decline, of a failure to respond to a quickly changing and evolving political environment. She should lead, recognise what needs to be done to save her party and be prepared to do what might have been unthinkable only a year ago. Nothing else is working so what on earth has she got to lose!

This is important for the wider Yes movement. When Scottish Labour join us (which they eventually at some point will have to) we win. Doing it on our own with only the Greens for support last time round was tough and Labour will bring with them their still significant and important social partnerships and historic constituency. We can fashion a wide ranging and inclusive new constitutional convention encompassing the whole of civic Scotland on the scale of the consensus secured on the Scottish Parliament. The argument then becomes about a future independent Scotland pursuing our left of centre political heritage and consensus versus continued, unwanted Conservative Westminster rule.

For the life of me I can’t understand why Labour would want to stick with a position that is so self evidently not working. Nothing is going to save Scottish Labour for this election, that perhaps needs to just be written off. Following that election, though, it will be the perfect time for that ‘reassessment’ for the reformers to come forward. If Scottish Labour don’t there may be no way back.

For Labour they can join a new consensus that will be working with the grain of our national ambition not always trying to neuter it and hold it back. Being part of a movement that will re-unite them with the people who used to vote for them. They can work with us to help save Scotland from a generation of unwanted Westminster Conservative rule.

This might be about the most important few months in Scottish Labour’s history beyond the now inevitable, soon to pass, electoral calamity. We saw a glimpse of it on Friday. They must now bring it back, develop it for the sake of out nation, and for the sake of their party.

What a curious start to this election campaign it has been.

The first thing to observe is that so many people think it is a foregone conclusion. Even those notionally fighting to ‘win’ this contest more or less concede that the battle is about who should be the ‘opposition’. When more interest seems to be focussed upon who will finish second rather than first we start to get into some peculiar electoral territory. I don’t think I’ve experienced an election with such a degree of fatalism amongst so many of the challenging protagonists. Where it’s true that opinion polls have been pretty consistent for well over 18 months they are only opinion polls and you would think that serious opposition parties would at least pretend that they are a Government in waiting? 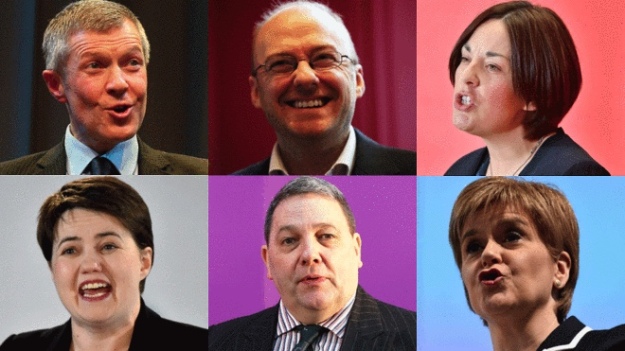 Tax, is of course the big issue, or so at least the press tell us. Scottish Labour’s ‘bold’ plans to increase the basic rate of income tax and increase the 50p band has given a bored press something to talk about. Scottish Labour of course had to do something in this election to make themselves distinct from the SNP and if that could be designed to seem like a distinction ‘from the left’ all the better.

The problems for SLab on this are just so many and manifest. Even before the current implosion of their curious arrangements there is little evidence that Scotland wants to become the highest taxed part of the UK when we still retain membership of that particular union. There is even less evidence that the Scottish people would be confident in Cabinet Secretary, Jackie Baillie discharging that responsibility.

What SLab propose is an across the board hike in the basic rate which those on below average incomes are also expected to pay blunting the ‘progressive’ claims of those SLab politicians. Then there was the disaster in waiting that was the unexplained ‘rebate’ to be offered to those below £20 thousand. That has now come to pass, clarified, then dropped, apparently because of ‘something George Osborne will do’. So far, so disastrously…

Most importantly is the ‘referendum legacy’ that still defines and contextualises practically all political debate in Scotland. Throughout the referendum the Scottish people were told that if they voted Yes an independent Scotland would be characterised by tax rises along with the other various Armageddons. People are therefore asking why after voting to stay in the union taxes are to rise uniquely in Scotland particularly when it seems they are to be levied to pay for Tory austerity that was so comprehensively rejected in the ballot box last year?

And that brings us to the one big issue that still dominates Scottish political debate like a political leviathan – independence. After correctly remaining quiet on the issue SLab have now decided to take the bull by the horns and defiantly proclaim that it is still a unionist party and would be prepared to once again stand shoulder to shoulder with the Tories in opposing our nation’s full self Government. Nothing could be more disastrous for SLab. It’s as if they are now going out their way to antagonise their ‘former’ voters and draw attention to the core reason for their political demise.

My hunch, though, is that SLab will probably just about see off the Tories. The Tories remain fatally flawed because of the overwhelming disapproval of a Westminster Government which is even too much for the ‘bleeding heart’ of Ian Duncan Smith. Where the pitch for the two million No voters is cute most of that constituency profoundly disapproves of what this Westminster Tory Government is doing and want nothing whatsoever of being part of this exclusive Tory club.

Other than that, issues coming to the fore are curious things like the ‘named person’ scheme. This scheme designed so that Scottish children have a single point of contact to ensure that they don’t slip through the various parts of the child safety infrastructure is being opposed with an almost evangelical vigour from the right wing press. Somehow I fail to see that many voters are going to have their vote influenced by competing claims about the safety of children but I’m also pretty confident that a determined press will probably ensure that it remains a feature.

Lastly, all opinion polls show almost incredible satisfaction rates for the SNP Government and that is the biggest of problems of all for the opposition parties. Their overblown attacks on SNP stewardship of public services remains almost light years away from the actual experience of the Scottish people creating real credibility issues for both SLab and the Tories. Just because the opposition parties want the Scottish people to believe them on public services it doesn’t naturally follow that they will. When the public are generally satisfied with the public services they opposition parties have to craft a new vision not just shout out why people should be unhappy with services they seem to be content with.

Meanwhile the SNP will take absolutely nothing for granted and will fight for every vote. With our mass membership we will have a real opportunity to have a real conversation with the people of Scotland. Polls are just polls and we still have to earn that renewed trust from the Scottish people.