Thank you for writing to me concerning the many issues around Brexit. At the time of writing this response the future of the whole chaotic project remains uncertain. I will endeavour to write to you again when things become clearer but this is what I have been doing on your behalf as your Member of Parliament in the past few weeks.

My immediate priority has been to stop the prospect of a no deal Brexit. A no deal departure would be the worst possible outcome bringing significant economic disruption, raising concerns about food supplies, medicines and the availability of fuel. In Parliament I have supported the successful efforts to secure the Benn Act which would legally oblige the Prime Minister to seek a further 3 month extension denying him the prospect of a quick no deal departure. I have also supported the actions in the Court of Session and the Supreme Court to have the suspension of Parliament declared unlawful. I was pleased when this was successfully upheld and I was able to return to Parliament to work on your behalf.

What underpins my whole approach to Brexit is the desire of this constituency to remain in the European Union. My view is the best deal we have is the deal that we currently enjoy as a full member of the European Union. Perth and North Perthshire did not vote for this Brexit and I have taken that as the mandate to oppose any deal that would make my constituents worse off.

The next few weeks will determine the conclusion of this divisive project and we should know what the future of Brexit holds. The Prime Minister is still determined to leave by the 31st of October with or without a deal – though he is yet to explain how this is possible with the legal constraints of the Benn Act. Beyond that there will almost certainly be a General Election which will in all intents be a ‘Brexit election’. I will be standing again as a strong and determined voice against Brexit and I hope to continue to make the case against Brexit if successfully returned.

Thank you for getting in touch and I look forward to writing to you again. 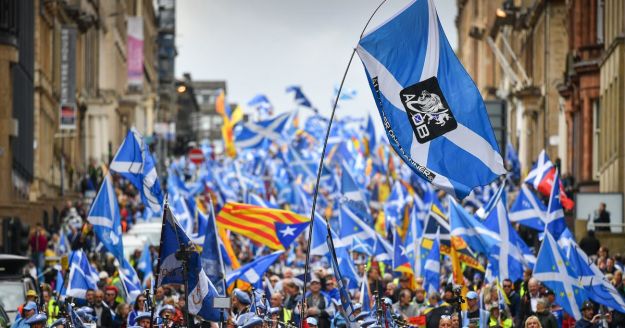 We will get our independence when the majority of the people who live and work in Scotland want it. I know it sounds indolently straight forward but somehow we have contrived to make this simple fact as complicated as possible.

Scottish independence will be secured when a majority of people in Scotland demand it because attempting to keep Scotland in the union against its will could and would not work in the UK. The range of decisions that a UK Government would have to be prepared to take to keep Scotland in the union when a majority want to leave would be singularly unpalatable to the UK. I seriously don’t think that the UK public would be at ease with itself if it had to resort to Catalan style political prisoners, particularly when we now know the UK public is at best indifferent about the maintenance of the union.

Just now all we hear is how the UK would ‘forbid’ a referendum and how they would never ‘allow’ independence. The Conservatives particularly pursue an energetic and vigorous campaign to oppose and ‘forbid’ a further referendum because they believe it is in their political interests to do so. Their view is it is they who represent majority opinion on independence and therefore they play hard to that constituency in order to maintain and increase their political support. Only two years ago the Scottish Conservatives significantly increased their share of the vote and gained 12 Parliamentary constituencies on a single issue platform of opposing a second independence referendum. The minute they stop securing such political support for opposing a democratic route to independence, or when that support significantly declines, will be the minute the case of ‘forbidding’ a referendum quickly disassembles. As we have seen recently that moment may be coming very soon.

The one thing we therefore need to do is to get support for independence as the majority view by persuading those who are as yet unconvinced. When we secure sustained majority support for independence everything changes. We saw just a hint of that when one recent single poll showed that independence was the favoured option amongst the Scottish electorate. That one poll alone created fissures in the Tories and almost broke the Scottish Labour Party who were left in the absurd and ridiculous situation of having to argue that democracy would be forbidden in Scotland. The various contradictions of promoting that position is the fate that awaits all supposed ‘democratic’ political parties. The Scottish Labour Party recently polled below 10% and are now destined to lose all their Westminster Parliamentary seats. Another recent opinion poll predicted that a seatless future also awaits the Scottish Conservatives.

We get to that majority support by persuading those who opposed independence in the last referendum by responding to their concerns and outlining how independence is the solution to issues that they care about. With the chaotic premiership of Boris Johnson and his suspension of democracy many more people are now seriously considering joining us. Scots who voted No in the last referendum but voted to remain in the EU have been impressed by our commitment to keep the UK in the EU. They are now beginning to recognise that this option is quickly closing down and the only way to secure the EU membership they desire is for Scotland to become an independent nation.

We must  therefore do everything to accommodate these political journeys. These switchers have serious and legitimate concerns about the Johnson government behaving unconstitutionally and undemocratically so we therefore must ensure that we look absolutely nothing like them. Talk of UDIs and illegal referendums only makes that conversion to our cause all the harder, as does talk of securing independence without the expressed consent of a majority of our fellow Scots.

It may indeed be the case that we will have to consider a range of options if the UK continues to oppose a constitutional route to a referendum but we first have to pursue our ambition to secure a legal, agreed and internationally recognised route to deliver the result we require.

And this approach is winning. Support for independence and the SNP is rising faster than it has for years. Our opponents are in total disarray, dreaming up new barriers and thresholds and are desperately grasping at anything that thwarts the rise in support for independence. They are practically itching for us to do something that puts all of this at risk and we must ensure that we do not give them that gift. That is why, as the First Minister says, we must act in a ‘calm, considered and consensual’ way right now.

After dominating political debate for the last decade views on independence are doggedly fixed and hard to shift and people are not encouraged to come over to us if they feel anxious or concerned about how we intend to get to independence. The only strategy that will ever matter is to secure the support of the majority of people who live and work in Scotland. This is now very much on its way and will soon reach a tipping point and our movement and cause will become unstoppable.

The UK will be able to assert anything it wants until we get that consistent majority support but all that changes when we demonstrably lead public opinion. They can of course continue to resist a majority but that comes with great risks for them. With majority support for independence the UK can either resolve the situation constitutionally and sensibly or dig in for a futile and damaging campaign that they can only lose. Whatever they choose. We win.