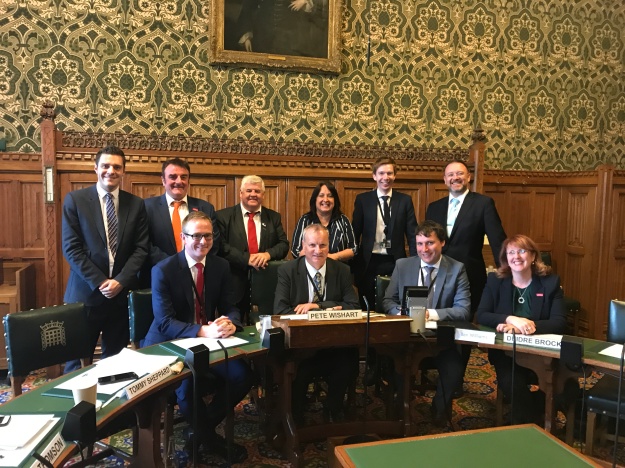 When I was first elected in 2001 as part of a group of five SNP MPs I never thought it would be possible for an SNP MP to ever chair a select committee in the House of Commons. Following our landslide in 2015 when we became the third party of the House I became the first SNP MP to be confirmed as a committee Chair. With our 47 MPs in this Parliament the SNP will once again assume the Chair of two select committees.

I will therefore be throwing my hat in the ring again to continue to build on the the work that has been achieved on the Scottish Affairs Committee and hope to continue to innovate in the way that work is being done.

When I assumed the chair in 2015 the credibility of the committee had never been lower. During the independence referendum the committee inexplicably adopted a position in the debate immediately alienating large parts of Scotland and excluding a number of key stakeholders. My first job therefore was to unite the committee, rebuild its credibility and make it a proper cross party body of scrutiny, representative of all opinion in the House. This involved patiently listening to our stakeholders and reassuring them that the Scottish Affairs Committee would be there for all Scotland. It also meant taking the committee round Scotland to engage meaningfully with the people of Scotland and listen to what they wanted from the committee.

Four years later and the reputation of the committee could not be higher. It is now seen as a key interface between civic Scotland and Westminster and through our innovative reports and inquiries it is by far the most reported parliamentary

committee in Scotland. Having conducted inquiries into fair work, bank closures, Scottish agriculture, oil and gas, problem drug use and the creative industries, the committee is now an indispensable part of the national debate in Scotland. In the hothouse of Scottish politics under my chairing nearly all reports have been unanimously agreed and the Scottish Affairs is the best attended committee in the House.

I have ensured that at least once a month the committee meets in Scotland for one of its regular sessions. More than that I have ensured that we have regular public engagement events pioneering town hall type meetings all over the country.

This article appears in the House Magazine.

There has surely never been a campaign so inept and ineffective as the campaign for a ‘People’s Vote’. Outplayed and outsmarted at every turn it was as if the whole campaign was designed to fail. Where the hard Brexiteers had a simple clarity to their ‘get Brexit done’ message the ‘People’s Vote’ offered nothing other than a sort of half hearted ‘stop Brexit’, which required doing the whole miserable EU referendum all over again and hoping for a different result.

And it could have been so different. Following the surprise result in the EU referendum there was a stop Brexit campaign there for the taking. Stunned with their success the Brexiteers were initially paralysed in knowing what to do with their prize. A minority UK Government meant that Parliamentary opportunities were aplenty and very quickly the UK public was coming to its senses in realising the scale of the mistake they had made. A solid ‘stop Brexit’ campaign from the outset could have derailed the whole project and strangled this disaster at birth. Instead what happened was that Parliament voted to trigger Article 50 on a three line Labour whip setting the clock to take the UK out of the EU in stone. Some of the leading lights of the ‘People’s vote’ incredulously voted for or abstained on this madness crippling any future campaign to stop Brexit that they themselves would seek to lead.

A campaign was required, one that would lead the increasing stop Brexit voice with a clarity of message uniting the UK in opposition to this disaster. And that is when the ‘People’s Vote’ presented itself in all its middle class, metropolitan horror. From the very first celebrity endorsement it was apparent to anyone that this was a campaign doomed to fail. Almost self congratulatory in its self styled ‘People’s’ exclusiveness the ‘People’s Vote’ offered nothing to leave voting communities save promising only to do this all over again. And the journey that it took us on in trying to win a rerun of the referendum was almost inexplicable. When challenged to describe what would be on a rerun ballot paper they hadn’t even thought through what the possible options would eventually be. Instead an imaginative range of barely credible propositions were presented in line with the ‘People’s Voters’ assessment of the current political situation. It even got to the stage that the vote they sought no longer became a stop Brexit vote and became instead a ‘confirmatory‘ vote on the Tory deal. Worse than that they even started to support a ’confirmatory’ vote without a clear option to remain. It was at this stage that I parted company with the whole exercise and broke the SNP whip to abstain against voting for this increasing nonsense.

It was just about then that the anti Brexit UK public took the whole initiative into their own hands with the quite incredible revoke petition. This petition quickly became the fastest growing and most signed petition in UK history and seemed to totally stun the ‘People’s Voters’. Could stopping Brexit now become a real feature in the campaign to actually stop Brexit? Well no, the ‘People’s Voters’ representatives in Parliament simply ignored this petition refusing to back the various revoke amendments that I and my colleague Angus Macneil continued to put forward in Parliament. Revoke remained a forlorn and unloved concept even when the ‘Scottish case’ brought by SNP colleagues and others ruled that Article 50 could be unilaterally revoked by the UK Parliament. Bizzarely, only the initial founders of the People’s Vote concept, the Liberal Democrats, grasped the opportunity and became a party of revoke, only too late, and half heartedly. Stung by the criticism from their former comrades in the People’s Vote campaign they laughingly tried to hide from this new found policy to much ridicule and eventual electoral pain.

And yet the ‘People’s Voters’ limped on with no majority in Parliament and up against a Conservative party that had found its Brexit mojo. I don’t think that it came as a surprise to anyone when the People’s Vote campaign finally collapsed in acrimony consumed by its own contradictions before the final General election ignominy.

The anti Brexit voice throughout this whole miserable experience could not have been more poorly served and let down. This failure was even achieved when nearly every opinion poll suggested that there was a clear stop Brexit majority just waiting to be properly led. A failure to provide any message clarity and a failure to try and secure an effective route to secure its ambition was only the start of the People’s Voters manifest mistakes. The lessons for the SNP are manifold and will have to take another blog to explain properly. Needless to say I had profound issues with the SNP going anywhere near this campaign and wrote about my reservations at length.

We are unlikely to see a campaign as inept as the ‘People’s Vote’ ever again and we can only feel sorry for the majority of the UK public who still oppose the UK leaving the EU. It is this majority who will now have to suck up the whole impending Brexit mess.

Out played and not up to it, the ‘People’s vote’ was simply the worst of campaigns.