It’s hard to believe that it’s almost exactly one year since the new group of 56 SNP MPs made their own colourful and good natured way to Parliament for the first time. In a blaze of rule defying selfies and good humour the Parliamentary authorities and the metropolitan press had no idea what to expect. Some of the press suggested a resumption of Bannockburn hostilities only with chips instead of claymores and words instead of woad. It would be the much predicted ‘Jockalypse’ as the new tartan terror was unleashed on an unsuspecting Parliament. 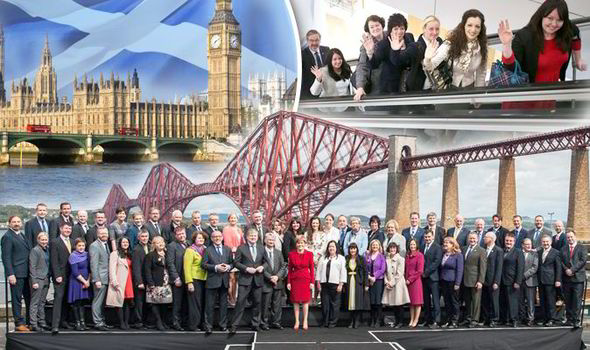 What was to follow confounded all these nonsensical assumptions as maiden speech after maiden speech identified a thoughtful, articulate bunch of people with amazing back stories and incredible ambition. The maiden speeches set a pattern of considered and amusing contributions and quickly set the tone of the new SNP group.

There was a huge job to do though, and that was to quickly up-skill the sometimes ramshackle and shoestring operation that had been the minority party of 6 in to the third force of the House. In the past the small SNP presence very much worked as a guerrilla force, standing as tall as possible and trying to make effective strikes with the limited resources available. Now we had to practically re-invent how we did things with the knowledge that such size in numbers brought new responsibilities, scrutiny but more than anything else, opportunity.

I will never forget the pace in which we quickly appropriated the comforts of the Liberals with dilemmas such as ‘what do we do with this portrait of Gladstone? Accommodation had to be quickly found for new MPs desperate to get down to work as quickly as possible. In the chamber Labour tried to deprive of us a front bench position to deny us the spotlight in the Parliamentary coverage. This was a war we also had to win, and did, grinding them down in the ‘battle of the prayer cards’.

But it was how this incredible resource was deployed that was the key to securing the success of the past year. 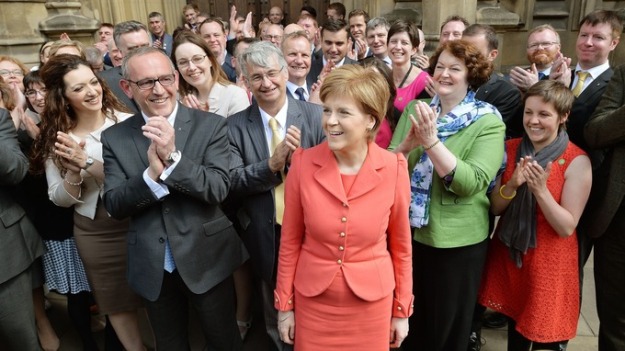 Angus Robertson devised a plan that had all group members working in policy groups with many having key front bench responsibilities. Meticulously discussing with each new MP their own strengths, identifying a role, a team emerged that has gone on to dominate debate. Some new members would be immediately thrust into a critical front bench position and expected to assume all the responsibilities in an almost sink or swim basis. The result of this approach means that we have developed a skills base and knowledge set unprecedented for a third party.

It was taking full advantage of the crises in other parties that was also key. I’ll never forget when I got to my feet to ask to ‘rearrange the furniture’ in the chamber after the latest Labour failure. Deftly sensing and taking advantage of Labour’s many divisions and incoherencies few commentators would doubt that we are now the ‘real’ or ‘effective’ opposition in the House of Commons. Just the prospect of the SNP voting on some issues meant that the Government never even brought divisive issues to the House.

As we go forward we now have experienced and established Members of Parliament to rely on quickly setting agendas and dominating discourse. A Labour Party engulfed in a seemingly endless and unwinnable civil war and a Tory Party settling scores after their own EU dispute will mean that our unity and certainty of purpose will now count.

If you thought you had seen something special from the Westminster SNP group – you ain’t seen nothing yet!

6 thoughts on “ONE YEAR ON. THE MAKING OF THE REAL OPPOSITION.”